Should I Be Worried About Mud Daubers In Salt Lake City?

Home › Blog › Should I Be Worried About Mud Daubers In Salt Lake City?

Is there really any bug that you can coexist with in perfect harmony? Most would say no but give one exception for the mud dauber. This wasp species are somewhat of a more gentle species because they're not social insects or aggressive, very rarely sting, and don't live in colonies. In fact, they prefer solitude and want to be as far away from humans as possible. Unfortunately, our homes provide great building grounds for their nests.

If you have mud daubers or their nests around your property, there's no big reason to be as worried as you should if it were a hornet's nest. Nonetheless, the risk of stings is still there, and that is something to be worried about. In order to remove that risk, you need to remove the mud daubers. Contact Salt Lake City pest control experts for mud dauber removal services today. 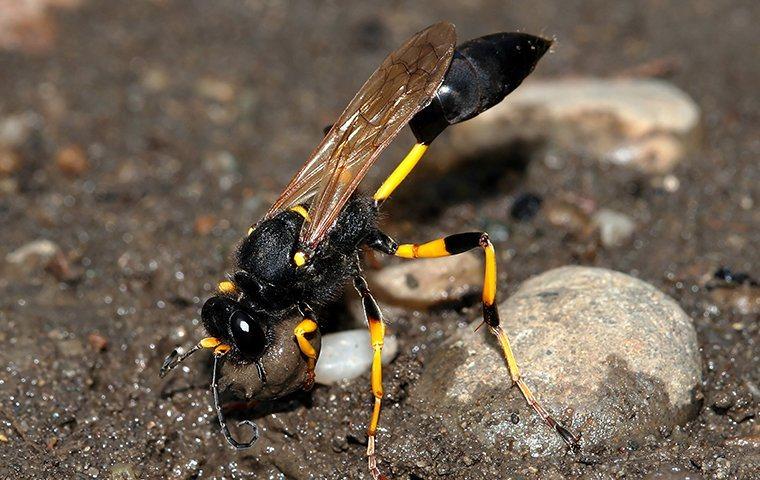 How To Identify Mud Daubers

Mud daubers, or mud wasps, are a part of the wasp species and consist of two families: Sphecidae and Crabronidae. As their name suggests, these wasps are known for the way they construct their nests out of mud or dirt. But when you see these stinging insects on your property, it's a warning sign that wasp removal services are in order.

The thing to pay attention to regarding mud daubers is their long, thin bodies. This species is an inch long with threaded waists. The 'threaded waist' refers to the very thin, thread-like section between their thorax and abdomen. They're usually black but also have pale-yellow markings or sometimes a blue metallic hue with dark wings.

You may not want to get that close to see their threaded body, but wasp identification will be very beneficial to you as a Salt Lake City resident because it will help you understand the type of wasp you're dealing with and their behaviors.

Does Anything Instantly Kill Mud Daubers?

Of course, there are various different wasp sprays you can use to rid your home of mud daubers and mud dauber nests, but we don't recommend it. Yes, mud daubers rarely sting humans, but they will if they feel threatened and also if you try to remove their nest.

There's been debate on whether homeowners should remove mud dauber nests because the species can actually coexist with humans. On the one hand, these stinging insects help with spider control as female daubers feed spiders to their babies. But then, they put you and your family and guests at risk for a potential sting, which can be especially bad for anyone with allergies. The bottom line is that if you see mud nests around your property or in your home, you should have them removed. We have many different treatment options that you can choose from at affordable rates.

What Is The Best Treatment For Mud Daubers?

As mud daubers can sting and inject poisonous venom (even though they rarely sting humans), the best way to get rid of them is with professional pest control services. At Pest Pro Pest Control, we have the proper tools, gear, and equipment to safely and effectively remove these stinging insects from your property. Simply give us a call to check out our treatment options.