Few yard pests are as dangerous and territorial as stinging wasps. Not only do they buzz around and sting people and pets, but they can also form nests directly in your yard to create a dangerous base of operations right next to you. Learning how to properly remove a hornet’s nest, as well as how to spot the signs of one forming, can save you from their harmful stings. 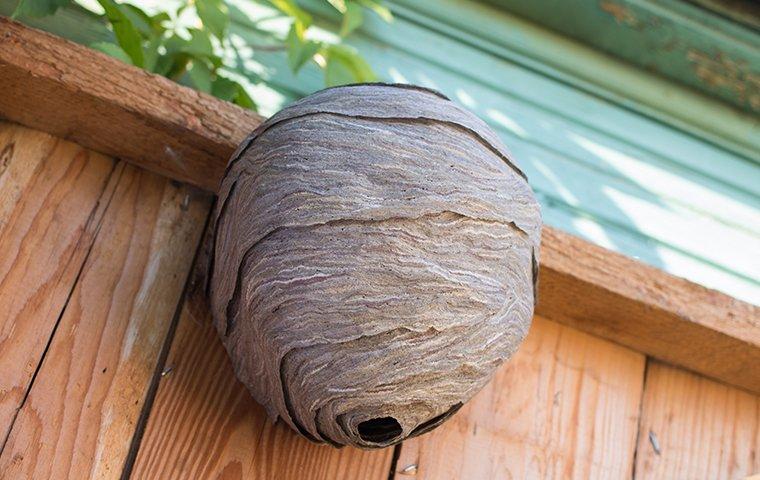 Hornets Nests: What To Look For

The term wasp refers to a wide variety of flying, stinging insects. This includes things like bees, yellow jackets, and hornets. We’re going to focus on the more dangerous of these species, setting aside bees and their honeycombed nests. Hornets, which can sting repeatedly and grow much larger than bees, build a wide variety of nests. However, you can generally spot them from these features:

Wasp nests are referred to as “hives,” which is an appropriate term for both the shelter itself and the massive population of bugs that grow from it. Mature hornets look for safe areas to build their nests and, once formed, they act as a factory that churns out more and more problems for your property. If you can spot one before it becomes a fully mature hive, you may just preempt the worst of the issues that come with hornets. Here are the stages of a nest:

The Dangers Of Improper Nest Removal

Because no one wants hornets to hunker down and form a thriving hive, too many property owners try to disrupt nests on their own. This is not only unsafe, it’s usually ineffective. Underestimating how far along a hornet's nest is can lead to a swarm of angry stings raining down on you quickly. What's worse these insects can sting multiple times without dying from the effort. The other common mistake is to think that a hive is dead when it, in fact, still houses several hornets. Even largely abandoned nests can be used as a resting ground for passing wasps, and many nests that seem inactive can actually be quite populated. Only professionals will know for sure.

With hornet nests, it’s better to be safe than sorry. Call the professionals for safe, proper removal of existing nests, and partner with your local experts for routine control measures. At Pest Pro Pest Control, we can not only remove existing problems at your Salt Lake City property, we can arm you with solutions and tips for how you can avoid future infestations. To truly stay safe from stinging hornets, trust Pest Pro Pest Control. Visit us online today.